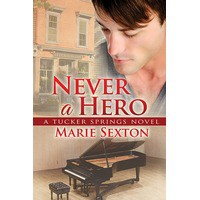 3.5 stars. Spoilerish, so read with caution. I tried to be vague, but I still think you can easily figure it out. I was very disappointed and angry with Owen's reaction to Nick's admission. I do understand being scared, but with all of Owen's talk about how other peoples' reactions affect him, you'd think he'd be more sympathetic. Nick kind of bothered me by the end too by acting like he was dying and/or condemning anyone who got involved with him to death as well. Listen, I wouldn't want to live with what he has to, but it's not the death sentence it used to be, and I don't understand why an intelligent, confident, and sweet man just couldn't figure that out, and that lots of people in his situation have relationships and if you're careful, it doesn't have to affect the other person. Other than that and Owen's mother (could someone please smack her?!), I loved this story. I liked the way Nick treated Owen from the beginning. It was great that he was blunt and didn't seem to stumble over the missing limb issue. And I loved how Owen grew in this book. He really came out of his shell, playing at the recital, not allowing Nick to push him away and stay in his cage, and standing up to his mother. Could she have been any worse?! Glad his dad came to his senses too. I had to laugh at the ending with Regina showing up. Wasn't expecting that.