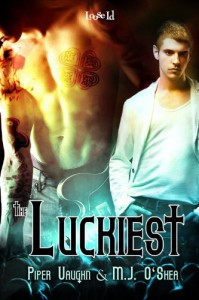 Re-read 4/16/14 for Re-Romancing the Faves Challenge. Sigh... I LOVE Nick. And my heart breaks for Luka every time I get to the Gil Kelley part. These two are so great together, and I love how Luka changes Nick. I wish he pulled his head out of his a$$ a bit earlier, but his final apology makes up for it all. And these two are so damn hot together!

Read Originally 4/29/12: I really wasn't a Nick fan even from the first book, but he grew on me. Yes he was a jerk, but Luka had his faults too. The whole birthday party thing... Luka should have at least given Nick a chance to talk to him. I get him kicking Brent out and being upset; but, for all his bitching about Nick being a jerk, he wasn't much better himself.

Any chance we get an Em and Surya story? Or maybe set Jeana up with Dre?!
Tweet