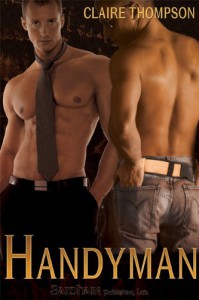 Re-read 3/13/14 for Re-Romancing the Faves Challenge: Jack was such a great character. At times, he was so eager, and others he was so unsure, worried about how he should feel instead of just allowing himself to feel the way he did. I can see why Will was a little upset sometimes because it always seemed like Jack would get his and then freak out. While I understand deciding he's gay late in life is hard for him, it's also hard for Will to know when to push, how much to push while worrying about pushing Jack too far, but also needing to have his own needs met. Will was so patient though.

These two characters had great chemistry, and I liked how at different times during the book each had the same thoughts/feelings of being the younger man/virgin in the relationship.

It's funny though: I guess I haven't read this one in a while because I felt like parts that I remembered were missing from the book. I was kind of surprised that while both had thoughts they were in love with the other, neither actually said it out loud. When I got to the end, I was a bit surprised and went back through to make sure my kindle somehow skip pages, but overall I still really enjoyed the story.