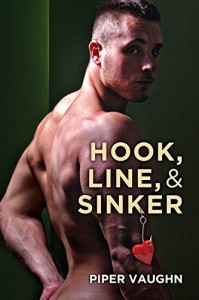 I won an ARC of this book from Piper Vaughn on fb, and it just happened to be my birthday (Happy birthday to me!).

Piper Vaughn does it again, not that I should be surprised at this point as I don't think I've ever read anything by her that I didn't enjoy. I don't know how she does it, but I always connect with her characters no matter how long or short the story, and this one was no different.

I was sucked into this story from the beginning and didn't want to put it down. I'm such a sucker for enemies and friends to lovers tropes, and this one is a little of both. Cas and Blake hated each other as teens and did everything to annoy each other, but now all grown up and living across the street from each other (temporarily), they become friends and eventually lovers, despite the fact that they both assume they'll continue to dislike each other.

I do have to say that I was mad at both MCs near the end, and I do think Cas should have apologized as well, but other than that one small issue, I loved this book. I enjoyed watching Cas and Blake's feelings, and eventual relationship, grow. And of course their chemistry was off the charts and the sex was ungodly hot. Would you expect any less from a Piper Vaughn book?
Tweet